You don’t have to live in New Orleans, Louisiana to celebrate Mardi Gras as locals do on Fat Tuesday. While Mardi Gras parades are a big part of our city’s culture, most locals stay in on Mardi Gras Day and cook classic Louisiana recipes like Red Beans and Rice, Gumbo, or Jambalaya. In addition, King Cake is a customary dessert that’s eaten from Kings Day (January 6th) through Fat Tuesday.

How to Make King Cake Candy

Old-fashioned toffee candy is traditionally served as a dessert candy. I like to store pieces of the candy in metal tins. This also makes for the perfect gift to pass out at a Mardi Gras party, school event, or gift to family and friends.

HISTORY OF MARDI GRAS: Europe has been celebrating Mardi Gras for centuries. Started in Rome, the carnival celebrations spread to France. French immigrants settled in New Orleans in the early 1700s. Socialites attended extravagant balls that were made for prominent figures. In the 1830s, parades and floats adorned the streets with many locals celebrating the carnival season. Each parade, called a “krewe” features a “court” that includes a king and queen along with their court. These courts are made up of prominent citizens. Still around today, Rex is the highest court, featuring many important figures of the city. Dozens of “Krewes” parade through the city every carnival season. While Rex is an “invite only” krewe, other Mardi Gras krewes like Endymion, Bacchus, Orpheus, and Zulu have a waiting list for riders that include “dues” that range from $300-$4000.

WHEN TO VISIT NEW ORLEANS TO CELEBRATE MARDI GRAS

MARDI GRAS CARNIVAL SEASON: First, Mardi Gras Day or Fat Tuesday changes every year and is based on Easter Sunday. Fat Tuesday is always the day before Ash Wednesday. Fat Tuesday marks the end of the carnival season. Don’t come to New Orleans on Mardi Gras Day and expect the celebrations to start rolling. In fact, at midnight on Fat Tuesday, the streets are cleared and the season is officially over. That said, my favorite time to celebrate and host guests in the city is the WEEKEND BEFORE Mardi Gras Day. Dozens of parade krewes roll starting on Kings Day (January 6th) and go through Fat Tuesday. Most parades are held on the weekend, but the last week of the carnival, parades roll almost daily. These krewes are the BEST of the carnival. My favorite parade and one that many of our family rides in is Endymion.

PARADES AND PARTIES: For a complete parade schedule, use this Mardi Gras parade schedule guide. The last week of the carnival season is a lot of fun. Locals and tourists traditionally dress up in costumes and fill the streets in celebration. Thursday-Tuesday is the BEST time to visit and join the fun. Many host parties and attend balls associated with each krewe, however, the French Quarter hosts the largest party of all. 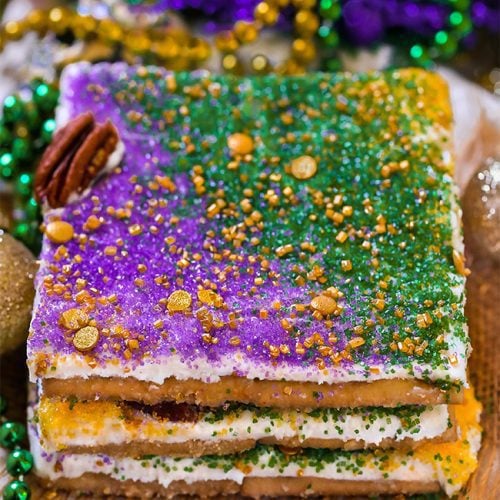