Pair these beef tacos with a side of Mexican Street Corn and Restaurant-Style Queso Dip for an at home authentic meal made from scratch! If you’re anything like me, you’ll want to share a pitcher of Margaritas and tacos with your friends, especially for Cinco de Mayo.

My favorite restaurant-style carne asada recipe. A quick fix lunch or dinner recipe when I’m craving Mexican food. A truly simple recipe that’s a weeknight staple in our home. Made with fresh ingredients for an authentic taste that cannot be beaten.

If you find yourself frequenting taco trucks or Mexican restaurants in search of real, authentic and homemade tacos, you’ll fall in love with this insanely tasty and delicious carne asada recipe.

It wasn’t until I moved to New Orleans, the food capital of the United States, that acquired a taste for these simple and regional tacos. With no shortage of locally owned restaurants in the city, I’ve became accustomed to authentic homemade dishes typically found in Mexico. The best part is that you won’t have to travel far to enjoy the same great taste.

How to Make Carne Asada Tacos

Typically, skirt steak is used. The best place to buy this is at a local Mexican grocery store behind the counter. Flank steak is another option. I highly recommend cutting the meat very thinly so the marinade seasons the meat well. It can then be grilled or seared.

Flavorful ingredient additions: While I traditionally serve carne asada tacos with cilantro and onions, you may enjoy these other varieties of toppings.

■ For more taco recipes, try these other flavorful dishes made with a variety of meats that include ground beef, fish, and chicken. 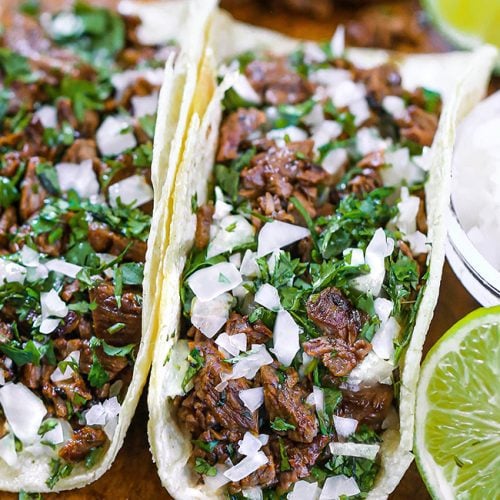 SKIRT STEAK: I recommend using skirt steak from a Mexican grocery store. While other stores do carry this type of beef, it’s sliced very thinly (almost shaved) and cooks in just a matter of minutes. NOTE: Using a thick hunk of skirt steak will take longer to cook and may taste different as well as have a different texture. If it’s the only kind available, use a very sharp knife to nearly shave it.