Dreamy Churro Cupcakes with a cinnamon vanilla cupcake and Cinnabon Cinnamon Cream Cheese Frosting. Topped with a sugary Mexican churro on top. If you like Mexican desserts and treats, be sure to try these luscious cupcakes next. To date, these churro cupcakes are my favorite dessert yet!

All week, I’ve been dreaming of a churro and I finally had to stop by El Paso to get one! I’ve had my fair share of Mexican sweets for the month, but I’ve been wanting more. Since today is Cinco de Mayo, I wanted to make something extra fun and share these amazing cupcakes because everyone loves the traditional Spanish and Mexican churro crullers doughnuts dessert.

The cupcake batter is pretty simple. It starts with butter, sugar and the usual dry flour mixture. However, this recipe uses both heavy cream and full-fat sour cream. The result? An incredibly moist cupcake that tastes better than any boxed version out there and I’m pretty such it’s better than any Mexican or American bakery churro cupcake I’ve tried before.

I couldn’t make a Churro Cupcake without indulging in Churros so I added on to the top with a little frosting pipe to get it to stick just right. I just love that the first bite is the churro on top. It left me fully engaged and ready to take a lick of the frosting!

How to Make Churro Cupcakes

Butter: Butter make everything taste better but it especially adds flavor to the muffin portion. Make sure it’s at room temperature to ensure even baking and beating.

Sugar: Both granulated sugar and powdered sugar are used. Granulated sugar adds just the right about of sweetness without the need for brown sugar or molasses thanks to the cinnamon that’s mixed right into the batter.

Flour: All-purpose flour works best. Spoon the flour into a measuring cup and level it off with a knife.

Eggs: Whisk in the eggs one at a time until fully incorporated. This will add richness and some moisture to the wet batter.

Cinnamon: There is cinnamon in the batter, in the frosting, and I even sprinkle it on top for garnish. Cinnamon adds a warm taste and aroma to this dessert so don’t forget to use it throughout the process.

Churros: Since this recipe does use churros and since I know they are not readily available pre-made in grocery stores throughout the US, there are a few choices on where to get them. First, most Mexican restaurants have them! Go ahead and place and order to be picked up.  Also, Walmart sells the boxed mix. Search for them in the ethnic food isle. Another option is to go online and buy the mix. I use this mix here – Tres Estrellas Churros Flour Mix. Of course, you could always do a homemade version, too!

Dairy: Cream cheese, full fat sour cream, and heavy cream all have a purpose in this recipe. The sour cream and heavy whipping cream add a lot of moisture to the cake that is noticeable with each bite. To make the churro frosting, which by the way is just heavenly, I’m using powdered sugar. Be sure using beaters in a large bowl or a bowl of a stand mixer to smooth the frosting.

Let’s talk about this frosting! It’s pretty incredible and tastes just like Cinnabon’s secret recipe. Although that wasn’t my intention when making these, it sort of worked out that way! You’ll want to keep this decadent cream cheese frosting on hand for future recipes!

How will you be celebrating Cinco de Mayo this year? 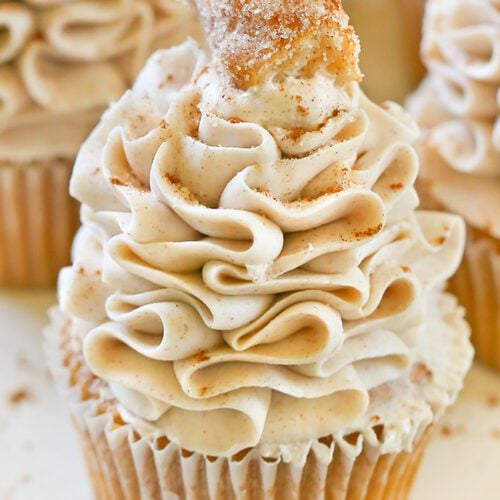 Use store bought Churro Mix (walmart/amazon) and follow package directions to make churros.  Roll in cinnamon sugar when done, then cut into small pieces. Churros can also be found at most Mexican restaurants already pre-made. Use Russian Ball Tip (Amazon) to frost cupcakes I find it easier to work with cold icing. Refrigerate it for 30 minutes if it’s too soft to pipe at the time.