A Traditional Herb Stuffing recipe with pieces of dried white bread, savory spices and herbs, freshly chopped celery, onion, and garlic moistened in a buttery chicken broth and baked in a casserole dish. A must make side dish recipe for Thanksgiving Day dinner with classic stuffing flavors. A holiday tradition with exceptional taste and texture.

For the perfect pairing, try this traditional herb stuffing with Honey Baked Ham and the best Creamy Mashed Potatoes.

This traditional herb stuffing comes together quickly with dried bread soaked in chicken broth, diced celery, onions, and garlic with fresh sage, rosemary, salt, and pepper. An egg is added to bind the bread together before baking in the oven.

Thanksgiving is a memorable time of year. It marks the end of the autumn harvest season just before winter starts. Friends and family gather around the table to spend time with each other and share a meal together. Often, this meal includes in season produce. Stuffing is a common seasonal side dish to share on Thanksgiving Day. Thanksgiving typically features a roast turkey as the star, but most people really look forward to the stuffing served at the table on this special day.

If you’ve never made homemade stuffing before and this is your first time, rest assured, it is not a difficult recipe to make at home. While drying out the bread may seem like a lot of work, start it a few days ahead of time and let it sit out piece by piece on the countertop. If you’re in a rush, drying it out in the oven works just as well. Once the bread is dried, the dish comes together pretty quickly. Making stuffing from scratch is so much better than any store bought stovetop stuffing I have tried before.

Did you know that stuffing can very per region here in the United States?

How to Make Traditional Herb Stuffing

Bread: A standard white bread works. From sandwich bread, French bread, Italian bread, or brioche bread. It is important that the bread is stale and dried out. To achieve this, simple cut the desired bread into 1-inch cubes and let it sit out overnight uncovered or simply heat it in the oven to dry out the bread. It’s important to not use moist, just bought bread as once the broth is added, it will become too soggy.

Herbs: Use fresh herbs whenever possible for maximum flavor and fragrance. Fresh parsley and sage are readily available in the produce aisle. Since rosemary may be harder to find fresh, I use dried rosemary. In addition to herbs, I like to use lots of freshly minced garlic. Even if you are not a garlic fan, I highly recommend using it.

Vegetables: Diced onions, celery, and garlic. Finely dice the vegetables into small bite size pieces so they cook down quicker and blend into the stuffing. Sauté the vegetables in butter and oil prior to adding the rest of the ingredients. For a twist, single out your onion and caramelize it separately before adding the celery in to cook down.

Broth: If you have a fresh homemade chicken broth in your refrigerator, use that. Otherwise, store bought chicken broth or chicken stock works well. If you’d like to make this vegetarian, use vegetable broth in place of chicken broth. The broth or liquid, works to moisten the dried bread crumbs evenly while adding delicious flavor to this classic side dish recipe.

Butter: I like to use unsalted butter so that the rest of the flavors come through. If using salted butter, adjust the salt to your liking. The butter is used in combination with oil to sauté the vegetables. In addition, it is the first thing to initially moisten the bread which you’ll be able to taste the butter right away.

Egg: Adding an egg to the stuffing adds richness and helps to bind or hold the stuffing together. It also adds additional moisture.

This recipe is for classic herb stuffing. For an Italian-inspired flavor look for herb flavored or texturized Italian breads such as ciabatta or focaccia and pair it with diced pancetta. If you prefer a Mediterranean twist, use sun dried tomatoes, lemon, and artichokes.

Fruit: Fruit such as dried cranberries, dried cherries, dried apricots, raisins, and fresh figs can add quiet the punch to your stuffing. Freshly cut up apples such as Fuji apples, or diced pears also made for a tasty addition. Cut any fresh fruit into small ½-inch pieces.

Meat: Adding a bit of cooked and crumbled sausage can become a fast tradition. Instead of using the regular pork or turkey sausage get creative and add some flavored sausage like apple sausage. If using sausage, add the 1 tablespoon of oil to the pot and cook it on medium heat to sauté it first. Next melt the butter and sauté the vegetables and continue with the recipe. Other meats can include cooked bacon pieces, chorizo, or pancetta to your stuffing.

Vegetables: Celery and onions are traditional vegetables to use in stuffing. Alternatively, white onions or shallots may be used for a more subtle, sweeter taste. For an earthy flavor, add diced mushrooms. For added spiciness, diced jalapenos will add some heat to your herb stuffing.

Spices: Add a bit of Lawry’s or for a bit of heat add some cayenne or Cajun seasoning. Another spice I sometimes add is poultry seasoning.

How long is the stuffing good for? Stuffing should always be separated from meat such as turkey and stored separately in the refrigerator in an airtight container for up to 4 days.

Can I make stuffing in advance? Definitely. This savory side dish can be prepared and baked a day or two ahead of time. To reheat, place the casserole dish in a 350°F oven for about 20 minutes. Add a little broth or melted butter to the mixture so it doesn’t dry out. If you use the stuffing in a turkey, you should warm it up prior to placing it in the bird.

Is it better to stuff the bird or to cook the stuffing separate? The United States Department of Agriculture (USDA) states that bacteria can survive in stuffing if it has not reached 165°F, possibly resulting in a foodborne illness. For this reason, a lot of households now days chose to cook their stuffing or dressing in a separate baking dish.

Can this be made gluten-free? Yes. The best way to make it gluten free is to use cornbread.

How much stuffing do I make for Thanksgiving? A good rule of thumb is to make ¾ cup to 1 cup of stuffing per pound of turkey.

Traditionally, stuffing is served on Thanksgiving Day and is part of dinner during the winter and fall months. Stuffing is often served as a side dish with another vegetable and a main meat. We eat it with roasted turkey, ham, or prime rib roast, and roasted vegetables like carrots, brussels sprouts, or broccoli. If you are planning to make a classic Thanksgiving Day dinner spread and want recipe ideas, try these below. 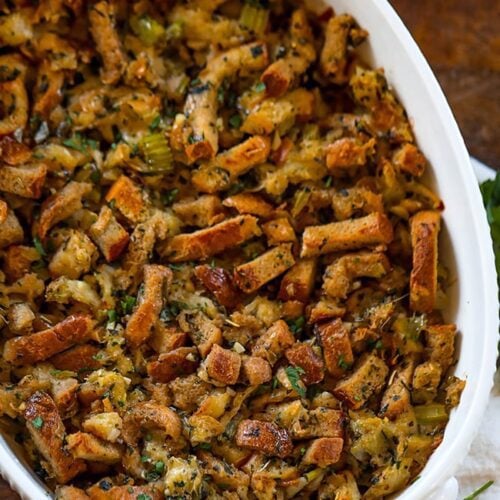