Spiral hams are a timeless classic at any time of the year. Like most other holiday roasts, baking a ham is easy and requires a really good recipe to pull it off. My Honey Baked Ham recipe is flavorful and is made with honey, different sugars, cinnamon, and seasoning. The entire ham is brushed in a glossy sweet honey glaze and it includes directions that yield a crunchy sugar crust on the outside.

How to Make Honey Baked Ham Recipe at Home

What Food to Serve with Ham

Baking a ham for a family dinner or holidays like Easter, Christmas, Mother’s Day, or Thanksgiving is my preferred method while serving it with a honey glaze flavor.

VEGETABLE SIDE DISHES: Serve sliced ham with this classic oven-roasted broccoli recipe with ranch and lemon flavor. It’s always a hit with the family. Another vegetable I like to make is this elevated Crack Brussels Sprouts recipe with crispy tips. Step basic green beans up a notch and make these Green Bean Bundles with Bacon. Make a batch of Creamed Corn to serve as a vegetable dish. Potato dishes are the most popular dish to serve with ham. Opt to make Creamy Mashed Potatoes, Cheesy Mashed Potato Casserole, or a Loaded Potato Salad recipe during the summer months.

FRUIT SIDE DISHES: During the spring and summer months, ham pairs perfectly with this Brown Sugar and Orange Juice Glazed Fruit Salad. For a quick and easy creamy fruit salad, make this Cherry Fluff Salad. It features cherry pie filling tossed with whipped cream and marshmallows. Another timeless classic is this Creamy Ambrosia Salad.

FALL/WINTER HOLIDAY SIDE DISHES: Ham typically served for Thanksgiving and Christmas Day pairs great with Cranberry Relish, Cranberry Sauce, and Cranberry Fluff Salad. The fluff salad is made with fresh cranberries, pineapple, marshmallows, and whipped cream. Sweet Cornbread is another one of my favorites as well as this Ruth’s Chris Sweet Potato Casserole.

HAM CALCULATOR: How much ham do I need to feed xx guests for our holiday dinner? When serving a bone-in ham, plan for guests to eat ½ lb ham per person. That’s: number of guests X 0.5 = number of pounds of ham.

Where can I find a spiral cut ham and can I use one that is not cut? Spiral cut hams are typically sold by the meats that you may find on the outer sides of the grocery store. Read the label to see if it’s spiral cut.

What should I do with the seasoning packet? Taste it. If you like it, you can always incorporate it and serve with the ham with spices in small bowl. Otherwise, pitch the packet.

I can’t find an uncooked ham. They all say fully cooked. Can I still make this recipe? Yes. Today, ham that’s served in the grocery store and at most butcher shops IS fully cooked. You’ll be hard-pressed to find an uncooked ham. Because hams are fully cooked, the recipes online and in cookbooks are for cooked hams. Since the ham is fully cooked and may be eaten cold right out of the package, most recipes like mine work to incorporate flavor and directions to heat the ham since it’s typically served warm for holidays.

LEFTOVERS HAM RECIPES: Place any extra ham in the refrigerator. Use any leftover ham and ham bone in my Red Beans and Rice recipe. This classic southern recipe features tender ham as an ingredient. Combine ham and cheese with puff pastry in these Baked Ham Sandwiches. For breakfast, make my Hashbrown and Egg Casserole or put in in a soup. You can also store leftover ham in freezer bags 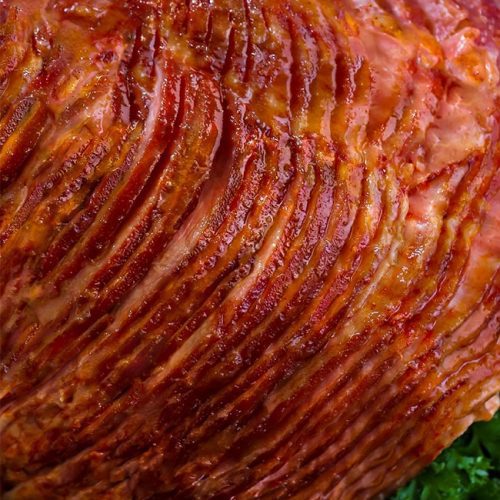 Ham comes completly cooked and safe to eat right out of the package! No need to worry if you are buying a cooked ham or raw ham as a raw ham is extremely hard to find today. Ham Servings: ½ lb x person (bone-in)