A tasty and simple, juicy rich Maple Glazed Ham with a crunchy caramelized crust topping. It’s one of easiest and least time-consuming main dishes for all your entertaining, especially for Easter, Mother’s Day, Father’s Day, Christmas, and Thanksgiving holiday events. Baked low and slow, you’ll be making this maple glazed ham recipe for years to come.

With only 4 ingredients, you will be able to mix up the glaze and bake the ham in the oven in record time. Most hams bought in the store are precooked so that it can be warmed in the oven or the slow cooker like this crock pot brown sugar pineapple ham.

One of the best parts about making a candied ham, especially for the holidays, are the leftovers all week. It doesn’t take much creativity to come up a few good recipe which I’ve covered more on below in the post along with recipes. There are so many recipes to make to use up this succulent meat. In the Mid-west selling hot shaved ham on a Sunday after church was and still is a huge part of culture. Many grocery stores and delis were trying to make themselves stand out and selling a pound of hot ham with 6 free crusty-top rolls on a Sunday and it soared in popularity and still is very trendy today.

Buying a Ham for your Holiday Table

Today, pork hams in the supermarket are fully cooked. From ham steaks, cubes, to spiral hams, to boneless hams, bone-in hams, and partially boned. All varieties of hams come from the leg hind of a hog or pig. You’d be hard pressed to find a ham that’s not precooked because in order for it to become ham, it must go through a process from it’s roast cut. Before it hits the grocery shelves, the pork is aged, and cured, then smoked or cooked.

Rest assured that the ham you’re buying from your general grocery store is already (most likely) cooked and ready to eat, whether it gets heated in the oven, toasted, or microwaved. If a ham is not cooked and sold fresh, it will say it directly on the package. Typically, fresh pork ham is harder to find but if you’re looking for it, try calling your local butcher shop.

Be sure to read the package for directions. Check the label to ensure what you’re buying whether it’s partially cooked, fully cooked, or uncooked. TIP: The shank end of a ham is fattier while the butt end is leaner and easier to slice.

Ham: I am using a boneless ham. Usually, hams come with a packet of seasoning in liquid form. Toss the packet out and make your own maple glaze. You’ll cut out the preservatives, excess salt, and different forms of sugar including corn syrup.

Maple Syrup: I like to use natural or pure maple syrup. It has the best flavor. The darker the syrup, the deeper the flavor.

Orange juice: The acidity cuts through the sweetness and adds a wonderful flavor of it’s own profile. Use freshly squeezed orange juice for the best results. I used about 1 navel orange.

Spices: a good mustard like Dijon will add the right amount of tang and a little salt will help to balance the sweetness in the sauce mixture.

When it comes to what size ham you should get, you need to calculate boneless and bone-in (spiral cut) hams differently. Figure approximately 1/3 to 1/2 of a pound for boneless ham. A lot of people forget that when they buy a bone-in or spiral ham, they need to account for the weight of the bone so figure your total ham weight higher at 3/4 to 1 pound per person when buying it from the grocery store

What to Do with Leftover Ham

DO NOT throw those protein leftovers in the trashcan where they do not belong. After eating leftovers in their original form for days on end, it’s nice to add a little variation to your meals. I highly suggest making a pasta with cream, peas, broccoli, and bow tie pasta with ham pieces. Also, a cheesy quiche recipe is perfect for breakfast. Here are a few more recipes to make using leftover ham after Easter. With a little creative inspiration, any one of these dishes make a great choice to pair with ham.

What’s the difference between a spiral cut ham and a regular ham?

Spiral cut hams are cut in one continuous cut around the bone. They pack extra flavor as well. Regular ham like a boneless ham is cut into slices and doesn’t feature a bone to cut around in the middle.

Can I dump the glaze on all at once?

If you try to dump the sticky glaze on all at once, most of syrup mixture will slide off and be wasted. Layering the glaze throughout the cooking process helps each layer to caramelize and develop flavor that’s locked into the meat.

Will my ham be dry if cooked uncovered?

Using the glaze throughout the baking process helps to seal in the moisture but feel free to use aluminum foil over the top to lock in extra moisture.

Why do people put such a sweet glaze on the ham if it comes with a packet or already glazed?

Most glazes come in a packet and while they are tasty, it’s always nice to learn how to make one on your own since those packets may contain only a small amount of actual “maple” or “honey” in them. In addition, those packets are also filled with preservatives and a lot of extra salt or sugar that’s not needed to achieve the same great taste.

Should I score the ham in a diamond shape?

It’s your choice. Depending on what type of ham you buy, you may have to do the cutting yourself with a sharp knife a large fork. Scoring the ham cuts through the outer layer of fat on the roast pork and allows for the glaze to penetrate even deeper. How to score a ham.

Baked ham is one of the go to meals for big family celebrations and the holidays. You’ll love this sweet, salty, and savory glazed maple ham at your next party. 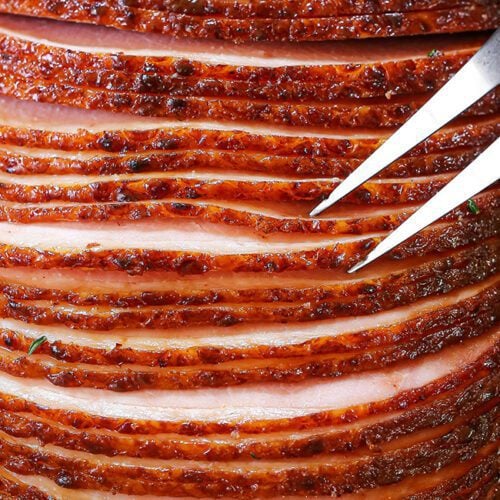